Ultrafiltration water system is a method of water treatment that can completely remove suspended particles, turbidity factors, TSS and dirt in the water. In this method, Ultrafilter are used and particles that are larger than 1 nm are completely eliminated.

Ultrafiltration water system or (UF) is used in the river water treatment, wells, seawater, treated wastewater and all water sources that include turbidity, TSS as well as microorganisms (such as bacteria, viruses and parasites) and by removing about 99% of all contamination factors which are or various factors such as beverage, agricultural and industrial.

TARHOKAR Engineering company business plan is working in the field of designing, manufacturing, installing a variety of water treatment package by ultrafiltration method among internationally renowned brands such as DOW, Hydranautics, MB, Inge, Koch which being used in a variety of industries such as advanced wastewater treatment, agricultural water production, seawater treatment, drinking water, deep water wells and rivers so as to eliminate turbidity, TSS and microorganisms. 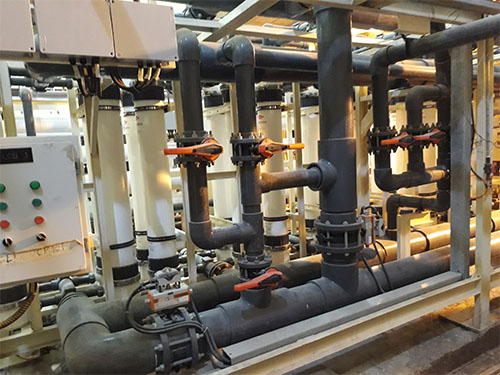 In Ultrafiltration water system package hollow membranes from the PEMS (Hollow fiber membrane) is used to purify the raw water. The diameter of the cavities on the surface of the membrane is able to remove suspended particles to a diameter of 0.02 microns; thus, 99% of the microorganisms, bacteria and suspended particles by these membranes are physically eliminated and the turbidity of the outlet water will be less than 0.1 NTU.

The backwash and CEB cycle depends directly on the amount of water turbidity. In the process of backwash, the following steps are done:

1. Internal ultrafiltration aeration (UF) and unloading compartments
2. Washing and backwash for disinfecting with disinfectants (such as chlorine)
3. Rinsing and CEB with chemicals (according to water analysis) to prevent sedimentation.
4. Preparation for reusing ultrafiltration by raw water
In addition to the above, cleaning in place system (CIP) is used periodically to prevent sedimentation and saturation of suspended solids and solutions

The quality of intake water to ultrafiltration water system

All manufacturers of ultrafiltration membranes have provided the maximum turbidity, TSS, and also the COD inputs to such water purification devices so that when designing a ultrafiltration unit, the designer of these units should be taken into consideration.

In a water treatment package by using ultrafiltration water system, in addition to the backwash cycle and the chemical wash (CEB), it is necessary to clean in the place or (CIP). This washing lasts for 1 to 2 days and after 3 to 4 months the ultrafiltration package (UF) is performed.

The purpose of cleaning in place (CIP) of ultrafiltration package is to clear the surface of the membranes from all solute deposits that over time have been taken as a saturation layer on the membrane surface.

In other words, the operator does not play any role in the process of backwash and disinfection and all of these steps are carried out by the PLC system.

The main results of using ultrafiltration (UF) package include:

An ultrafiltration water system can be used in a wide range of water and wastewater industries, some of the most important features include:

1. Surface water desalination such as river water, water behind dams and water of ponds which have color, turbidity and high TSS.
2. Infected water purification to microorganisms such as effluent or water contaminated with sewage.
3. Pretreatment of reverse osmosis units (RO) especially in seawater treatment.
4. Advanced wastewater treatment and sewage outlet of biological wastewater treatment plants.

The use of water desalination package by ultrafiltration method, due to its high efficiency in removing turbidity and TSS, as well as the complete elimination of bacteria and organisms is used as a safe method in pretreatment of reverse osmosis water desalination (RO). As reverse osmosis units are highly susceptible to turbidity and microbial contamination; therefore, the use of ultrafiltration water system especially in those areas where water turbidity is high, it shows a special reassurance about the efficiency and lifetime of reverse osmosis membranes.

Another advantages of water desalination by using ultrafiltration method, is its wide application in the removal of microorganisms, bacteria and viruses at the outlet of sewage and wastewater treatment plants. Since, the use of this system reduce the chemical oxygen demand (COD) and causes to the complete elimination of organisms and increases the efficiency of agricultural irrigation by wastewater.

Looking to the future by ultrafiltration water system

Today, we encounter with serious problems such as reduction in groundwater resources, decreasing annual precipitation rates and increasing population in our country Iran which lead to the water scarcity. Without doubt, one of the ways used in many countries of the world is to manage water resources in order to restore wastewater and effluent into the production cycle and reuse it.

Meantime, considering the high efficiency of ultrafiltration package in the treatment of wastewater and sewage; therefore, there is the possibility of returning water to the production cycle and it should be seriously considered.